BurnaBoy concert: Looks like Duncan Mighty has received his own N10 million largesse from Gov Wike 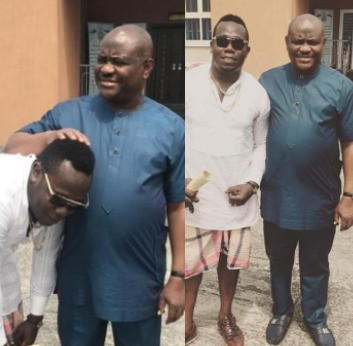 Duncan Mighty appears to have received the N10million largesse Rivers state governor, Nyesom Wike, promised to give each artiste that performed at the homecoming concert for Burna Boy in the state last week.   Duncan Mighty who was among the artists that performed that day, shared a photo of Governor Wike on his page this […]

The musical taliban himself, Oritse Femi comes through with a brand new record entitled ‘Dey Your Own‘. ‘Dey Your Own‘ features the highly acclaimed Port Harcourt first son, Duncan Mighty and it comes after the release of his previous record tagged ‘Mercy‘.   Production credit goes to his regular partner, Vice Beatz. Check it out and share your thoughts below. […]

Duncan Mighty Omila. Duncan Mighyty makes another vibrant return on his latest potential hit track dubbed ‘Omila (Biggest Behind’. The veteran musicians gives shout out to fellow musicians, other socialites as he sings to appreciate women’s ‘back side’. Listen to Omila, the new track by Duncan Mighty and ENJOY!         DOWNLOAD

Ducan Mighty spent three nights in police custody, pointed a gun at me in his studio and failed to honour our contract- Rapper, M2 opens up

Two days ago, veteran musician Duncan Mighty wrote an open letter to former Imo State governor, Owelle Rochas Okorocha, claiming his life is being threatened because of money paid to him by the politician to record a song with one of his boys. (Read HERE)   Now, the artist in the middle of the whole drama has […]

After gifting T-spize a Benz for producing his hit song ‘Sekem‘, MC Galaxy comes through with a new single titled “Man Must Wack“. ‘Man Must Wack’ is an highlife tune with a groovy sound that will shake your waist. To accomplish this MC Galaxy teams up with Alterplate boss Harrysong (Mr Sings) and melody singer Duncan Mighty. They all did justice to this […]

After revealing what lead to his exit from Triple M G and the rift between himself and Ubi Franklin, Iyanyabounces back with this smashing record tagged “Halle“. He taps on PH first son, Duncan (Weyne) Mightyto strengthen the melody of “Halle”. The song is produced by Yung Alpha and co-produced, mixed and mastered by Selebobo and Mixx […]

Percy Martins, real name, Okosun Percy Osaremhen, is a songwriter and singer. He was born and raised in his hometown in Edo, Nigeria, to a family of six children. His love and passion for music started in his secondary school days. He recorded his first song in SS1, and that experience was the moment, he […]

On this mid-high-life Afro-groove, “AKUnaswiss” Faruk features the rave of the moment and award winning veteran artist of our time Duncan Mighty, Faruk channels the spirit of his hard work and hustle to convey this amazing piece of work, exercising the story of the street and expressing his gratitude towards life and success. he relays a positive, relevant and […]

Nigeria’s finest music duo consisting of Vast and Smash, Bracket link up with Duncan Mighty for their new musical video  titled “Chinelo”. Just recently Duncan Mighty has been one of the most featured acts since the release of his hit song “Fake Love“, and now Bracket premiere the musical video of their hit record titled “Chinelo” featuring the Port Harcout’s first son, […]

The DMW vault keeps unleashing bangers after bangers. Within a matter of weeks, we’ve seen an EP from Dremo, 2 singles from Mayorkun, and a big song and video from Davido. Keeping the momentum alive, DMW presents yet another single, this time featuring man-of-the-moment, Duncan Mighty. Davido and Peruzzi complete the red-hot line-up on “AZA“. Listen below. Oya say your Aza!     DOWNLOAD

Ace producer, K-Solo stated that Wizkid brought back Duncan Mighty to the consciousness of music industry. The producer made this statement during a recent interview. Duncan Mighty used to be a big deal in the music industry but for a while he was absent from the mainstream music scene. It wasn’t until the release of […]

Reekado Banks and Duncan Mighty team up in new Baby fresh produced tune Starting off the week in a big way, Mavin Records act, Reekado Banks comes through with the highly anticipated record titled “Bio Bio”. Bio Bio is a follow up to his previously released single titled Pull Up which had quite some buzz. […]