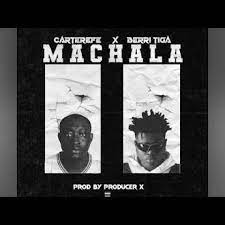 Desmond Ogaga Erhieyovwe who is popularly known as Dessy Carter drops his first official single for the year 2018 titled “RUSH” produced and mixed and mastered at Docside Theatres.He is a fast rising star from the south south who’s about to infuse more life into the Nigerian music industry., waste no time and hit the […]

Fast Rising Rapper and Entertainer Harry Carter Jumps on Logic’s “Flexicution” instrumental and murders it.. Bars Bars Bars… To save you from your oblivion, ASAP SESSIONS by GORILLA TV is a Platform given to Artistes on the Come Up to show case their talents. Honestly, We’ve seen HARRY CARTER’s works and none of them is […]

NGIMKHULU Crooner, Super Talented, Classy Hip Hop and Fast Rising Artiste, HARRY CARTER takes to Ls as he continues with his blaze. After the release of his previous single WASSUP, in remarks to show he ain’t stepping on the brakes took his Artistry to an higher level as he drops a Classic! titled BEHAVE Featuring […]

Benny Risk a sensation highlife artise is here again with another dope tune tittled (ONYE) after dropping 4 different songs last year November/December via his riskember project this time around he team up with another raplord from the east cost Switchcarter Listen & Download to “Onye” by “Benny Risk Ft. Benny Risk” below:- DOWNLOAD: Benny […]