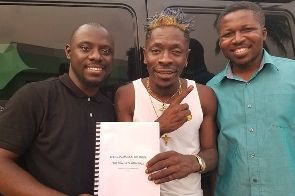 The latest Zylofon Media signee was seen in photos arriving on set and taking directions from Ghanaian actor and director, Kobby Rana.

In other photos that were posted on the official Facebook page of the hilarious situational comedy show, Shatta Wale was seen being prepared to shoot a part of the show.

The photographs are captioned, “Something BIGGGG is Coming!!!!!!!!!!

The “Taking Over” hitmaker was seen exchanging pleasantries with some cast of the popular TV series which airs on a number of television stations in the country.

Among the cast who welcomed Shatta Wale to the set were the famous Lawyer Nti and Judge Louis Lamis.

Not too long ago, some of the actors of the comedy series called on Shatta Wale where they presented him with a script of the show.

The musician who is noted for his powerful and energy-filled stage performances has charted a new path for himself in the world of acting with his involvement with the cast and crew of his first movie, Kejetia vrs Makola – the comedy show.

Shatta Wale made headlines last week when he became the latest musician to join the star-studded artistes signed by entertainment powerhouse, Zylofon Media.

According to reports, Shatta Wale’s services for Zylofon Media fetched him $1.5 Million, a car and a house.