A “Rogue staffer” has alleged that US President Donald Trump “won’t leave the White House in January” despite reportedly losing the election to Joe Biden.

The allegations which emanated from an unverified Twitter account called Rogue POTUS Staff, which is operated by a group known as “Anonymous patriots” also alleged that Trump has “told aides to ‘write his name on everything.'” in the White House

The accusation was tweeted out on Monday November 9, after Trump lost his presidential battle to Joe Biden and claimed it was a “rigged” election even though there is not yet any known evidence of widespread voter fraud.

Trump has refused to concede and has started lawsuits in the states he lost to Joe Biden.

The tweet reads: “Not announced yet, but there will be a press briefing at White House at 3:00 pm today to talk about the President’s plans.

“He will basically be saying that he has no intentions of leaving in Jan. He’s been using the phrase ‘write my name on everything in the room.'”

The tweet then adds that the event would be held at Whyte House Monograms in Chevy Chase, a small family oriented monogramming business. 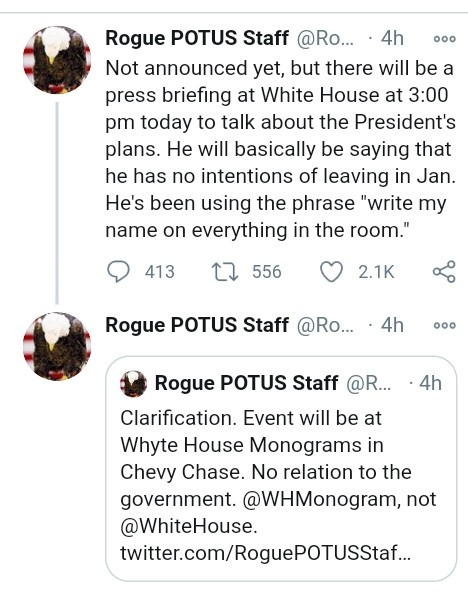 The president has doubled down on his refusal to accept election defeat as his sons Eric and Trump Jr demanded a “manual recount,” while his wife, Melania told him not to give up.

According to the Axios report, Trump’s campaign was mobilizing its troop for war.

One advisor said: “We want to make sure we have an adequate supply of manpower on the ground for man-to-man combat.”

On Sunday, Giuliani also told a press conference that Trump was “obviously not gonna concede” and he will start filing lawsuits today.

“I don’t know if there’s enough evidence to set aside the entire election,” the former mayor of New York City said. “Certainly not around the country, maybe in Pennsylvania.

“In Pittsburgh, we have observers who were for 24 hours kept out of the room or kept away from the room where they were counting the mail-in ballots which of course are highly suspicious ballots.

Giuliani explained that ballots came in late “in bundles” and “it looked very much like they were trying to make up the 700,000 difference,” referring to Trump’s earlier lead in Pennsylvania.

He insisted GOP observers in Pittsburgh were “kept so far away they had to use binoculars to see the ballots” and contend that about 300,000 were not valid.

Trump’s lawyer said he has a video documenting that, plus 50 witnesses.

Giuliani added that the team will file a corresponding lawsuit for claims including “violating civil rights for conducting an unfair election” and violating equal protection by treating Philadelphia and Pittsburgh different from the rest of the state.

He alleged that 450,000 mail-in ballots were separated from envelopes so observers could not tell if they were valid.