Rahama Sadau has dismissed reports that she has been arrested and sentenced to jail over her racy photos.

Last week, the actress who is prominent in the Northern Nigeria movie scene, shared photos of herself rocking a backless dress. She was bashed by many Muslims for adorning the dress which they say is ”Unislamic” as it exposes parts of her body.

Following the ensuing debate on Twitter, some Nigerians went on to attack the person of Prophet Mohammed.

Some Muslims kicked against it and filed a petition against her before a Sharia court.

Earlier today, there were reports online that she has been arrested, tried, and even sentenced to death. Some claimed she has been sent to jail.

Rahama has come out to dismiss the report.

In a Twitter thread, she pointed out that she is yet to receive any police invitation or court summons. Read her tweets below

I understand the love & concern pouring out from some concerned individuals & it’s much appreciated.

I have received many messages that I have been arrested and sentenced to jail earlier today. I have no idea where the news emanated from. I’m therefore calling on people to stop spreading FAKE and unfounded stories.

I haven’t received any police invitation or court trial. I’m reiterating this to well wishers that I’m SAFE and FINE and I have never received any legal trial for whatever reason. To those trying to bank on this issue to create an unrest, Please give it a rest

It’s indeed a hard time for me. This is not the right time for FAKE NEWS. Much love to those who reached out, I’m grateful. Love Rahama” 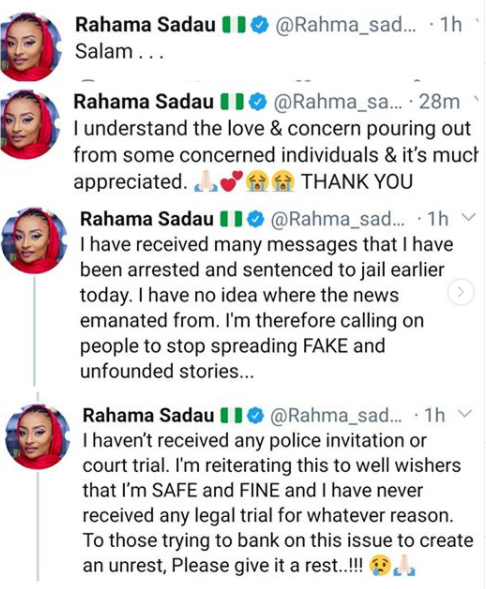