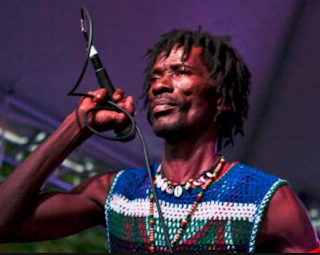 Famous Sierra Leonean traditional artist, Ahmed Janka Nabay has died in his home in northern Sierra Leonean district of Kambia, according to his band colleague Pa Fullah.
Late Janka moved to the US in 2003 and returned home last year.  He’s known as the King of Bubu Music, played the traditional music of the Temne people of Sierra Leone, who dominate the northern part of the country.  His music, which has its roots in the Sierra Leonean Muslim tradition, is played with the traditional bamboo flutes.
Nabayy, 54, who died on Monday, was credited for being the first musician to record this version of music by reworking the bamboo flutes and metal pipes with electronic instrumentation, hence the tag, King of Bubu Music. According to APA, The dreadlocked artist was best known internationally, especially in the United States, where he relocated in 2003 and returned only in 2017.
Nabay and his Bubu Gang band made the Bubu music popular in Brooklyn and Manhattan in the US. Fans have taken to twitter to mourn the musician.