Skip to the content
Leo spoke with Sunday Scoop, and he’s revealed that his mother encouraged him to partake in the 2018 edition of the Big Brother Naija reality tv show.
“I do not feel bad that I was evicted from the Big Brother Naija House. I went on the platform so that I could put my business out there and I think I was able to do that. I provide services for people and the more I’m known, the better for my business.
That was the reason my mum made me to go for the audition. If I was able to win the grand prize, it would have been a big bonusbut I am not disappointed; that’s how God wanted it to be. I was the only one in the house who didn’t unpack his luggage because I knew that I could live at any time. I just wanted to sell the real me; I made up my mind not to lose myself because of the money. At the end of it all, my mum was very happy and she said I made her proud.”

Leo also talked about the housemate he would miss the most of the Big Brother Naija show, he said;
“I would miss Alex most. She was devastated when I left the house and that made me very sad. Even after the competition, we are going to continue being friends. She is a very amazing person and I am not going to push her out of my life. Unless she doesn’t want to be my friend, then, I would have to let her go. I pray that she would win the competition.”
On his relationship with Alex;
“There were a lot of misconceptions because Alex and I were very close. I was the only one that knew how much talent she has. I was the only one who constantly encouraged her because I saw beyond her playful persona.
That was why we were very attached to each other. She is someone I would have loved to pursue something serious with but I have other priorities at the moment. However, I am not in any relationship yet.
Right now, I am friend with someone whom I really like and I am hoping that it can grow further very soon.”
He however didn’t say anything about his girlfriend whose photos have circulated on the internet while he was on the Big Brother Naija show.

On what next for him after the competition, he said:
“I’m ready to take whatever opportunities that come my way. Everybody knows that I am a real estate investor and I have my own company. I also engage in haulage business. I recently advertised a real estate project online called Alexander Apartments, which I named after Alex. I sold the first phase before going into the house and the second phase is ready for business.” 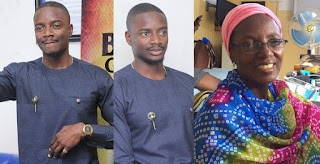