Science Student Head Prefect, Olamide has urged his fans not to abuse drugs and alcohol, while advising them to live and drink responsibly.

Unarguably the King of the street, Olamide released a recent jam titled, “Science Student”, and it has been well received by the streets.
But apparently, some see the song as a way of promoting alcohol and drug abuse, one way or the other.

In a post on his Instagram, Olamide said;
“Since the release of #ScienceStudent, the support has been massive. As you are all sharing, dancing, singing along to this relatable music of mine, I want you all to take some time to reflect on the subject, say no to drug abuse. Don’t abuse alcohol. stop mixing what you don’t know about.”
“Live responsibly and drink responsibly. Don’t aspire the ‘highness state’ but a state of purpose fulfillment and passion discovery.”
“Together let’s put an end to drug abuse and save as many lives as possible. The video will be out soon and I can’t wait for you all to see it. #SayNoToDrugAbuse #DrinkResponsibly #ScienceStudent” 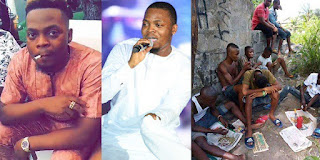