There was commotion today June 19, in Ayobo, Lagos, after a girl was badly injured allegedly by a policeman.

According to eyewitnesses, the police officer was allegedly chasing a motorcyclist in a narrow street in Ayobo, Lagos, when the girl was caught in the middle of the chaos and she was injured.

In a video shared online, the girl is seen bleeding profusely as spectators called her parent on the phone. The girl’s blood also formed a pool in the red sand.

An eyewitness, Bakare Kehinde, who shared the story on Instagram wrote: “Igeshu Police Man just wounded an underage trying to pursue a bike man inside a closed street.@Ayobo…Very sad..”

He added: “IGESHU POLICE JUST INJURED AN UNDERAGE GIRL JUST COS HE WAS PURSUING A BIKE MAN…THIS IS SO TERRIFIC AND AN ACT OF INJUSTICE..PLEASE NIGERIANS LETS FIGHT FOR THIS CITIZENS.” 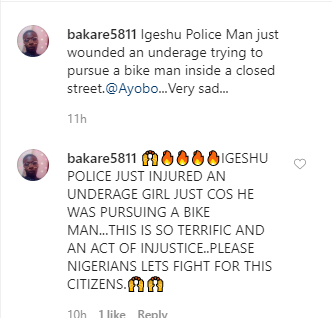