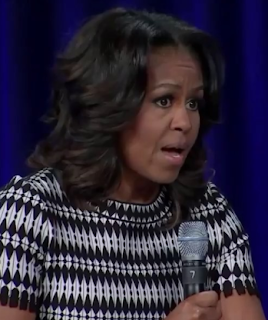 Michelle won a lot of hearts in America and all over the world with the way she carried herself as First Lady of the United States and a lot of people have wondered if she intends to run for President someday.
The former First Lady has said she has no intention of becoming president, then gave her reason for that.
Speaking at the 39th annual Simmons Leadership Conference, Mrs Obama said: “I don’t wanna be president, I don’t think i should be president.”
She added: “I think I can do a lot of things but that’s not one of them.”
She went on to say: “I know what I’m good at.”
She was also quoted as saying: “Just because I gave a good speech, I’m smart and intelligent doesn’t mean I should be the next president. That’s been our problem. We’re very shortsighted about how we think about selecting the commander-in-chief.”
Though she doesn’t intent to run for office, she however, called for the support of young women who have the capacity to fill that position.
Watch the video below.