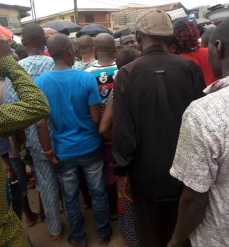 A Facebook user, Henry Ugwu took to his Facebook page to share how he helped save a girl from jungle justice in Onitsha, Anambra state.
According to him, the young girl who was accused of stealing from a shop in main market was dragged to the floor where people were ready to beat her to death. Fortunately, through the help of few other people, the girl was saved. He wrote

All the man said was: “Somebody stole something in main market and she is the person”. The woman who was in the bus with me had already appeared. She asked the man, “And you didn’t catch the person in Main Market?” That was how sense entered their heads. The crowd started asking the girl what she stole. She made it clear that she didn’t steal anything, that she was buying something and felt a sharp push, and the next thing she was there on the floor. That she hasn’t been to Main Market. Suddenly, the Accuser pushed through the crowd and started running. Apparently, he wasn’t alone in whatever he was planning. A keke pulled up, he jumped in and drove off. Later, someone would say that this was a new style of kidnapping. Apparently, they had wanted to drag the girl into the keke and drive off with her in the guise of taking her to the police station. Obviously, they lost control. The women started raining curses on the Accuser as they helped the teary girl with clothes. Some men took it upon themselves to find him and beat him up. The bus conductor handed me my change and asked me to get in the bus. On our way out I took this pic below, a cluster of people apologizing to the girl.I am sharing this story because I want us all, especially young people, to stand up against jungle justice anywhere. Add your voice and help rescue the situation instead of standing there, recording with your phone or complaining about it. You can start by sharing this so others can find courage too. #SayNoToJungleJusticePS: Women need to wake up in this country and know that they have as much power as the men. Knowing how much women have suffered in the hands of patriarchy in this country and around the world, how can you see a crowd of men surrounding a woman and you just wave it off and continue with what you’re doing?