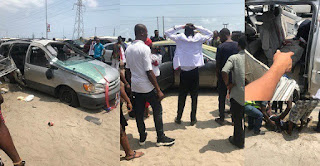 A day of celebration turned to its direct opposite after a newly married couple and their families were involved in a tragic accident at Jakande, Lekki Epe Expressway on Sunday, March 18 afternoon.
According to an eyewitness, the couple and their groomsmen were returning from church when the car they were travelling in lost control and somersaulted about three times.
The eyewitness confirmed that one of the groomsmen died on the spot.
“The couple were completely distraught. The groom was wailing while the bride was just rolling on the hot tarmac in her wedding gown,” the eyewitness said.
The eyewitness also stated one person “deemed it fit to reach into the blood soaked car and pilfer the purse of one of the occupants that was lying unconscious. He was caught thankfully.”
Photos below: