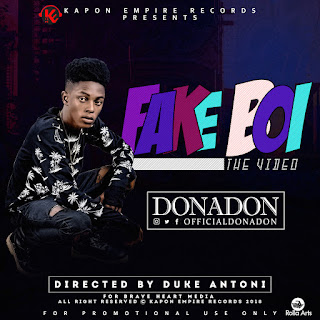 FAKE BOI’ BY DONADON KEEPS TRENDING  Smash9ja Promotions and Kapon Empire Records Presents, Fast Rising Rapper Donadon, Who is a hip hop artist popularly known for using his mother tongue (igbo language) to deliver his flows over rap beats. Donadon, real name- Ugochukwu ibegulam, hails from imo state but was born and raised in coal city,enugu state, Nigeria. He rose to fame after his first smash hit song titled,kpoi, took over the streets. To push the envelop to the next level, his label Kapon Empire Records, released fake boi, another single from donadon, which went straight to becoming a blast with over one million downloads last year. This 16year old rapper, Donadon, have shared the stage with the best of the bests and have did collaborations with many, no wonder why many media outlets have stated that,’he is the real deal to look out for this year’.  CONNECT WITH DONADON ON SOCIAL MEDIA: