Skip to content
A lady identified as Cynthia has revealed how she met her husband on a bus while traveling to Abuja. According to her, meeting her hubby on that bus five years ago is one of the best things that has happened to her as they both have a son together.
She narrated her story to Humans of Abuja. Read what she said below;
My name is Cynthia and I met my husband on a bus while coming to Abuja 5 years ago. It was my first time in Abuja and I intended staying with my cousin in Abuja before I could start working and earning money. My cousin lived in Wuse which was my destination while my husband who is a business man lived at Kubwa.

While in the bus, we started a healthy conversation we talked about so many things and laughed as if we had known each other for a long time. At a point in our discussion I fell asleep and rested my head on his shoulder unknowingly, when I woke up and realized myself, I looked at him and he smiled and he said I could sleep more.
On getting to my final bus stop in Abuja, I called my cousin but her number was switched off I was angry. I tried so many times but I couldnt get her on call and I cried because it was my first time in Abuja and I didn’t know any place in Abuja.
My husband consoled me and told me that I could stay in his apartment for that night till I could reach my sister on the phone. I was so scared at first I refused his offer but i realized that I didn’t have any other option than to follow him because I didn’t have enough money to pay for a hotel that night. I went home with him on getting to his house he showed me a room which I slept in peacefully. I woke up in the morning and tried my sisters number again, it was available and he spoke with my cousin.
My husband directed her to his house, and she came to pick me that morning, we exchanged numbers and we talked for months and started dating. He got a job for me and in less than two years of our relationship we got married and I have a son now.
He is one of the best things that happened to me after so many failed relationships and he loves me with everything in him. I bless the day I met him in that bus. 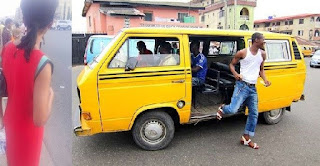