A Ghanaian prophet has stirred up controversy in the country after he claimed in a prophecy that one of the country’s top singer, Shatta Wale, is close to meeting his demise.

The prophet, who has been identified as Cosmos Walker Affran, the leader of Cosmos Ministries, took to his Facebook page some hours ago to state that the country should be in prayer mood as he saw them mourning one of their super stars, Shatta Wale.

Ghana should pray, I see a national mourning again the whole nation was in tears and this time is Ghanaian singer “Shatta wale”, and it is very close “death” . ” Thou saith the Lord ” prophecy by Prophet-Cosmos Walker Affran.

Well, his post had some of the singer’s fans tagging him and apparently after seeing this, he got angry and made threats that if he doesn’t die by December, he’s going to burn down churches in the country.
Shatta is quite serious in carrying out his plans… well, unless according to him, he gets a presidential plea……
Watch; 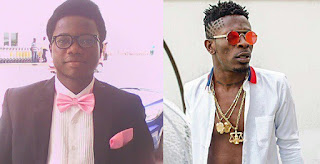