Skip to content
Warri underground pidgin rapper JB Clayton has gone from independent and unsigned act to own his own label..

The talented rapper is to release a new single featuring son of the soil “ShuunBebe” on a Mr Moore produced song on the 16th of February.

This new song “streets of warri” would fly under his own imprint “Hbois Entertainment”. there is much to expect from this rapper and his bold movement.
Streets of warri is a song talking about the good and bad places in warri. It’s a must listen. So watch out, anticipate this…
Connect With JB CLAYTON – @Jbclaytonofficial 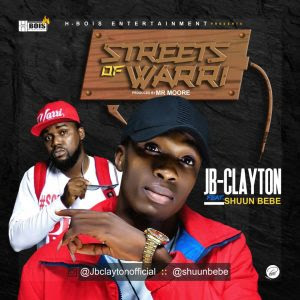