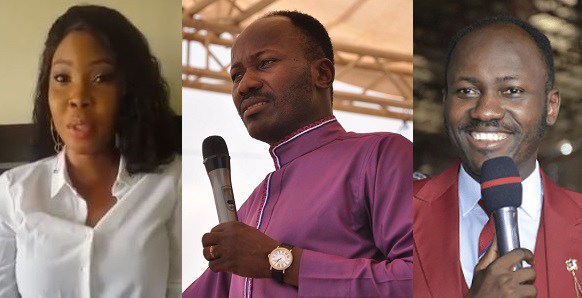 Again, in a new video, Stephanie Otobo has said she was not forced to go to Apostle Suleman’s church in Edo state to make a confession.. This is contrary to a video that made rounds earlier today as released by Sahara Reporters.

Stephanie has said the video that made rounds was manipulated.
In the new video where she spoke with Vanguard, Stephanie saidI was not lured, kidnapped, forced or paid to confess. I confessed for my own peace of mind and my wellbeing as a human being. How much can the Apostle pay me that will match what I was paid, and I am still being offered more, by my sponsors?”
Asked what prompted her sudden desire for “peace of mind”, Miss Otobo said that she has had sleepless nights for several months over the role she played as the fulcrum of the sex scandal.
She also accused her alleged sponsors of blackmail, stating that the said video was made in June 2017 in the Canada home of a certain Chidi, the guy responsible for most of her videos last year. Otobo says that the well rehearsed video was made as an insurance tool against her in the likely event that she ever exposed the plot by her manipulators.

Hear her; “That video was made in June, 2017 and it was made by my manipulators so that they would have something against me incase I ever told the truth.”
Majority of the readers on Sahara Reporters also mentioned the possibility of foul play. One of them said, “Sahara Reporters was in such a hurry, they failed to edit the part where the girl mentions the date that video was made (June 2017)”
Another commentator wondered why anybody would make a video and save it for almost one year in anticipation of such a day, if it was not a deliberate scheme against the Apostle.
Looking radiant in her white shirt and deep blue pants, Stephanie Otobo seemed happy as she exchanged light banters with our correspondent before agreeing to make us an exclusive video.
The Urhobo-born musician also expressed fears about her security as she vowed to unmask her manipulators in court rather than on social media.
“For those of you asking me to mention names, sure, I will mention names in court because they have been sending emails and texts offering me a lot of money but I cannot be manipulated anymore.”
She urged all parties involved in the scandal to move on as she has found peace with God and herself.
Most Nigerians are eagerly awaiting the bombshell of names of the characters involved in the alleged plot.
You will recall that last year, Apostle Suleman was the subject of a sex scandal that went viral on social media. But in a rather shocking turnaround last Saturday, his main accuser, 23yr old Miss Stephanie Otobo appeared on the altar of Omega Fire Ministries in Auchi to confess to having been used by “powerful politicians and pastors to implicate Apostle Suleman.”
“I was made to tell too many lies, I was chocking. The burden of guilt was too much for me to carry. If I did not correct this grave sin, I would never have obtained the forgiveness of the body of Christ and even in the life hereafter”, she said.
Watch the video below;