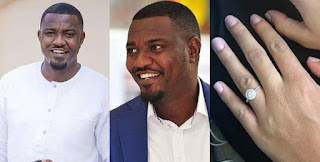 Yesterday, the whole social media went haywire, after Ghanaian Actor, John Dumelo took to his Instagram to share a picture of a lady’s hand with the caption; “She said yes”.

Everyone all thought John has finally gotten hitched, and he’d be getting married soon,but it turns out no.

It was his best friend, Fred Nuamah (Chief Executive of Ghana Movie Awards) who proposed to his girlfriend of many years, Martekor aboard a flight to Liberia where they were all headed to attend the inauguration ceremony of President elect, George Weah.

Below is a video from the proposal 35,000 feet above sea level: